30th December 2016 was a hot day in Sydney and I was enjoying the Christmas to New Year short holiday. That morning, I had gone to the gym as usual, did a strength/circuit class, had coffee with a gym buddy and was then at home, reading a book on the lounge under the ceiling fan. Late afternoon, I started having some really bad chest pain – as if an elephant was sitting on my chest!!! The pain continued throughout the night, relentless and radiating to my right shoulder. I could not sleep and breathing was difficult.  I thought “Surely this is not a heart attack, not me, I have none of risk factors and no heart disease in my family. I must have pulled some muscle doing push ups at the gym”. I felt a bit better the next morning and did a spin class, sweating much more than usual.  I took myself to the medical centre after the gym and the GP ordered some blood tests and sent me back home.

By then it was New Year’s Eve. I felt fine.   6pm, I was watching the news on TV when the pathology laboratory called me and told me to call an ambulance immediately and go to the hospital: my blood tests apparently showed evidence of significant heart damage and high troponin levels (I had of course never heard of troponin until then). That’s when I started panicking badly as I was home alone.

Ambulance on New Year’s Eve, cardiac ward for a few days, with a battery of tests including ECG, ultrasound, and finally an angiogram which revealed a SCAD. I was discharged on the 2nd January with the standard cocktail of drugs (aspirin, blood thinners, beta blockers and statin!!).  Everyone close to me – myself included – were baffled by the news. But I am known to like a challenge and I thought that whatever it takes, I’ll do it and get better! 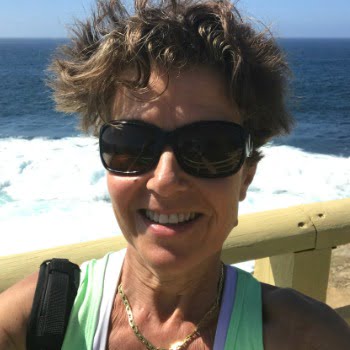