“In January 2009 I was 26 weeks pregnant with my second child. We had just left my mother in law’s house and heading to look at buying a new car, we were very excited. I was in good health, although I had suffered awful morning sickness and this particular day I was feeling the heat, being the middle of summer.

My husband Michael was driving and my 9 year old daughter Eliza was in the back seat. We had, coincidentally and miraculously, just driven past our local hospital when I felt strange. I told Michael I felt faint and couldn’t lift my arms up. He looked over at me and said I had a really funny colour about my face and I felt cold and clammy. I felt like I was burning up. The air conditioning was on in the car but I felt my veins were on fire.

Michael is a very blokey-bloke, and I was surprised when he did a U-turn at the lights and pulled into the hospital car park on the other side of the road. I told Michael I was ok, that I was probably just suffering from the heat and not being able to keep breakfast down that morning. He sped up and then told me he thought I might be having a heart attack.

I was confused as to why he thought this as I wasn’t experiencing any pain, but every second I was feeling worse. Something was wrong. Michael drove right up to the door of the emergency department and told my daughter to stay with me as at this point I couldn’t seem to make my legs work either. Michael ran in to triage and yelled for help. He told the staff he thought I was having a heart attack but he couldn’t get me inside as I was so pregnant. They called for a wheel chair but it didnt arrive.

Meanwhile my daughter Eliza had hopped out of the car and was standing by my seat fanning me. She looked so worried. I told her everything was ok but I could hardly speak. I tried to comfort her but couldn’t. Eliza then started telling ME everything would be ok as soon as Dad got back, it wouldn’t be long now. I felt as though I was loosing consciousness but I was scared to leave my daughter alone in the carpark like this so I battled to stay with her.

Finally the triage nurse and Michael came running to the car. Without the wheel chair they supported me into ER and placed me on a chair where I unceremoniously crumpled and slid down. The nurse undid my zip on the back of my dress and the last thing I remember was thinking how many people were there seeing me in this state and in the same thought not caring. I must have blacked out at this point as the next thing I remember is being in one of the treatment rooms being crushed by a worried looking staff member with an ultra sound machine. I told her she was cracking my ribs and she apologised but said she needed to get a good image. There were dozens of people in the room, all looking extremely busy but I wasn’t sure what they were doing. I looked over to the door and saw Michael & Eliza standing there looking pale and worried. I smiled at them and said I was ok. Everything was going to be ok…then I blacked out again.

I woke up to see I was in a comfortable bed, hooked up to leads, machines and I.v. My mum and dad were there looking down on me smiling. A nurse walked in and told me I had just had a huge heart attack. My blood tests revealed the highest troponin levels she had seen…then I felt pain..my chest was exploding and that elephant everyone talks about was literally sitting on my chest..I blacked out again.

I had tremendous care for over a week in the cardiac unit at the Logan hospital. I was treated like a queen. My cardiologist was wonderful and had worked under a team who specialise in heart attacks in pregnancy at the Royal Brisbane and Women’s hospital so she transfered me there as I was experiencing severe pain and needing more investigatory testing. I was extremely worried about my baby and was told my pregnancy was looking normal and everything was ok, but the team at the RBH would make sure of it.

I continued to suffer pain and had two more “events” and ongoing testing. Everything came back normal. I was told that my ECG’s had all been normal, all the nuclear testing was normal and my obs were normal. My troponin was the only test coming up high, as well as the angiogram which diagnosed a disection in the middle wall of my main coronary artery. I had extensive damage to my heart muscle and its pumping capacity was very low. In time with meds I would get better but I wouldn’t have stents placed as there was some debate as to their making this condition worse.

I left hospital after some time but was admitted again with another re-occurance. By the fourth week I was told it was time to think about delivering my baby. I had tried so hard to come to term, I was only 30 weeks and would have been happy to have a normal birth but all the specialists decided it wasn’t going to happen. That night I was prepped for an emergency C-section under general anesthetic. Because I had a suspected allergy to morphine, the anaesthetist decided to use a pain block in my belly, similar to those used in your back. It didnt work. Poor Michael waited hours before he could see me while the pain of my surgery was maintained by panadol. I stayed up all night fearing I would miss my next dose, fearing the pain and wondering when I would see my baby. I mustn’t have been thinking clearly..I was waiting all night for my beautiful son to be wheeled in to me, unaware he was in a humidi-crib strapped up to leads and machines just like I was, two buildings away, in ICU. By morning I was a mental mess. I had heard about the baby blues, but I didnt recognise my behaviour. I was screaming and crying for my baby and couldn’t be consoled. Very far removed from the shy polite patient I had been over the last month. I was visited by my specialists who ordered I be wheeled to see my baby. A huge ordeal, involving many staff making room for my bed to be transported so far. I was horrified by my behaviour, but when I saw my beautiful son Zachary for the first time, all I could think of was how perfect he was and how all my pain had been worth it.

Nearly ten years on, I still suffer those mysterious pains. I was taken off my medications of beta blockers and statins which made the pain worse but now I feel like a complete mess. My life didnt bounce back as many SCADsuffer’s do. I am constantly fatigued, in pain and I feel useless. My family is my constant source of love and light and I owe everything to my beautiful husband who saved my life. I still have huge hope that I will be better one day, but in the meantime, I have found SCAD support groups all around the world. With so many people discussing this issue, it won’t be long before a cure is found. 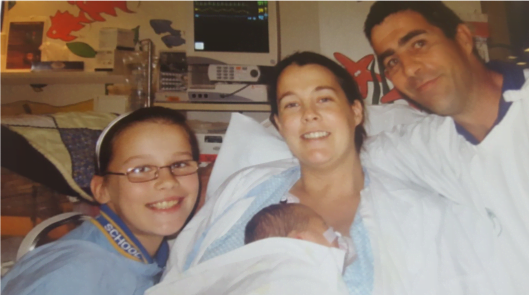