On 2nd September 2018 my life changed forever. I was home with my two teenagers looking forward to a quiet weekend and my husband and parents were away working.

I woke up feeling unusual on the Saturday like I had indigestion that just wouldn’t go away. By that night the feeling was radiating up into my throat and jaw and I just kept ignoring it and trying to take my mind off it. I had a terrible night’s sleep and woke the next day, Father’s Day, feeling exhausted and my arms were really heavy. I couldn’t get out of bed. I knew there was something wrong but didn’t think it was serious – maybe just a virus that I would get checked out the next day if I wasn’t feeling better.

I started to feel better in the afternoon and got up and came into the kitchen, looked at the clock and noticed it was 4.40pm. That’s all I remember of the next 8-10 hours and the next thing I recall was waking up at Monash Heart Hospital in Melbourne with nurses and doctors telling me I’d had a heart attack.

My 17 year old son found me collapsed on the floor of the kitchen luckily within minutes of my collapse. He got his 14 year old sister out of her room to help. She insisted her brother call the ambulance which he did and between them they looked after me until the ambulance arrived which only took about 20 minutes – together they saved my life.

I was told that I’d had a SCAD (spontaneous coronary artery dissection) heart attack. Which basically meant that one of my arteries tore and this caused a blood clot which led to the heart attack – there was not enough oxygen and blood getting to my heart. I thought they had made a mistake – I was only 49, very healthy, reasonably fit and had absolutely no risk factors at all. Apparently, this type of heart attack is most common in women between 30 and 50 that are relatively fit, healthy and the reasons are still unclear. There is not a lot of research available for SCAD but thankfully this is now changing with the help of a lot of fund raising and grants so hopefully in the future we will have more answers.

I’ve learnt a lot about this condition in the last year, but I wish I had known about it when it was happening to me. My artery will hopefully heal with the help of medication, but my heart muscle suffered some permanent damage due to the fact that I ignored these symptoms and didn’t seek help earlier. It’s quite confronting and hard to share my story but if it can help raise awareness about this type of heart attack and can save another person’s life it will be truly worth it. Please share my story with others and help raise awareness. 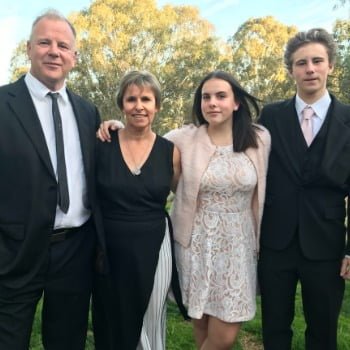